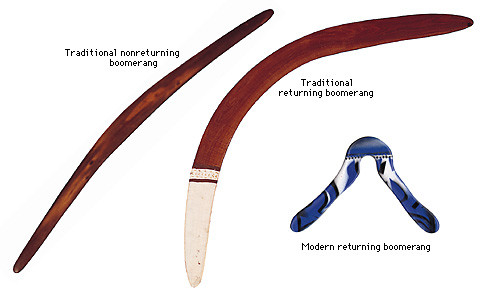 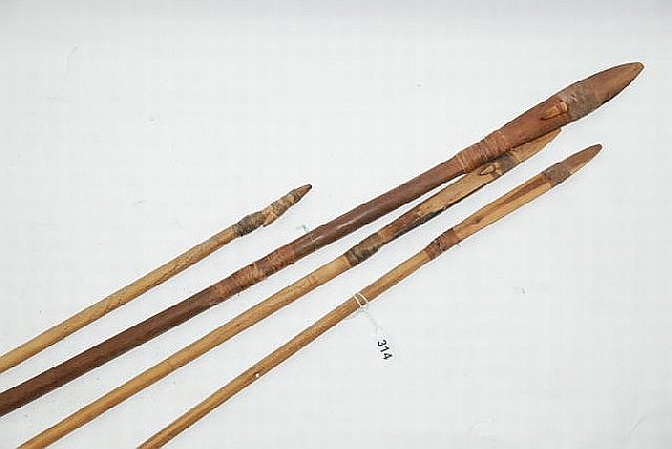 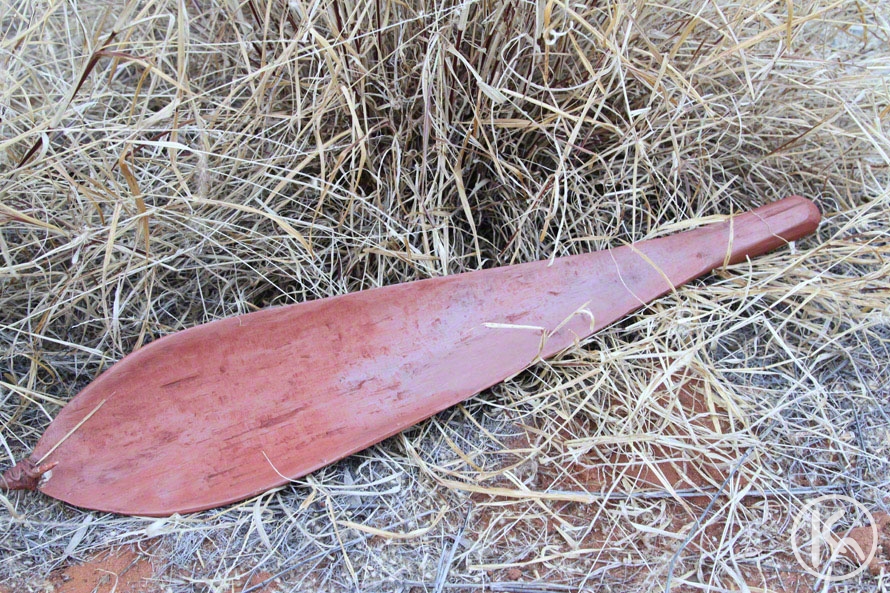 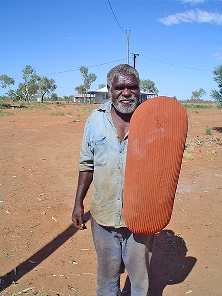 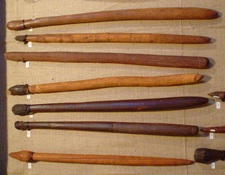 Boomerangs were used for warfare, hunting prey, rituals and ceremonies, musical instruments, digging sticks and also as a hammer.

Boomerangs made in the desert are non-returning and when thrown correctly can reach distances of 160 metres. They are usually made from Mulga wood and can be smoothed or carved with various designs of that maker or family group.

In Aboriginal Art the boomerang is depicted as a 'V' shape or the 'killer boomerang' as a Number 7.

Hunting spears are usually made from Tecoma vine.  These vines are not straight but in fact curly.  To straighten them the maker dries out the moisture by heating the branch over a small fire while it is still green.  While doing this he shapes it into the form that he wants.  A wooden barb is attached to the spearhead by using kangaroo (sometimes emu) sinew.  The opposite end is then tapered to fit onto a spear thrower. On completion the spear is usually around 270 centimeters long.

In Aboriginal Art the spear is usually depicted as a straight line with a triangle at one end.

Inserted into the Spinifex resin of the handle of many spearthrowers is very sharp piece of quartz rock.  This is used for cutting, shaping or sharpening.   The spearthrower was also used as a fire making saw, as a receptacle of mixing ochre, in ceremonies and to deflect spears in battle.

Shields are usually made from the bloodwood of Mulga trees. They are designed to be used in battle but are also used in ceremonies.

Like other weapons, design varies from region to region. Many shields have traditional designs on them whilst others are just smooth. In Aboriginal art the Shield is depicted as an oval shape with two small oval circles for hand holds.

Clubs are made from Mulga wood and can vary in shapes and sizes. Many are fire hardened and some have razor sharp quartz set into the handle with Spinifex resin.

They are used in ceremonies, in battle, for digging, for grooving tools, for decorating weapons and for many other purposes. In Aboriginal art paintings fighting clubs are usually depicted the same as digging sticks.