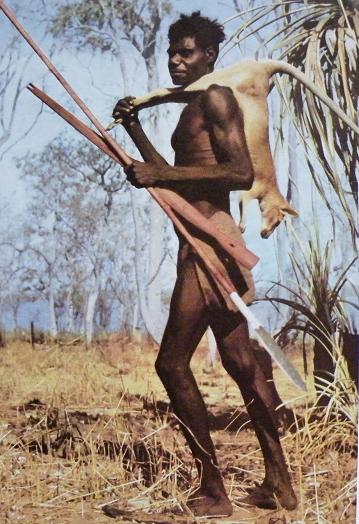 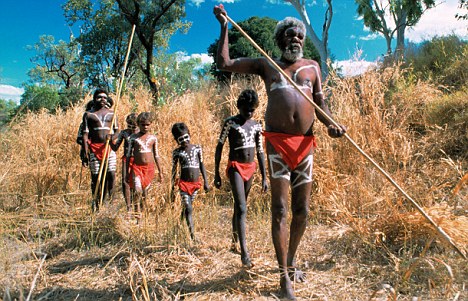 Boys learning to hunt from their elders.

Aboriginal peoples hunted wild animals, gathered plants, fished, and collected shellfish. They moved often to find new sources of food.  How often people moved depended on how fertile their territory was. In desert areas, a band of Aboriginal people might move almost every day to find food. In areas with more abundant plant and animal life, such as the south and east and along the coast, a band could stay in the same place for several months.

Aboriginal peoples had a strict division of labor. Hunting and fishing were men’s work. Gathering shellfish and plants for food was women’s work. Hunting trips might last several days, and they were not always successful. The favorite animals for hunting were kangaroos and wallabies. Coastal Aboriginal peoples hunted seals. Hunters needed to be good trackers and have a detailed knowledge of animal behavior. They were experts at imitating the cries of wild animals and birds to attract them close enough to kill. Men never talked to one another when hunting. They used touch and sign language to communicate without making a sound. Aboriginal hunters smeared their bodies with soil to disguise their smell. They used spears to kill most animals but relied on boomerangs to kill birds.