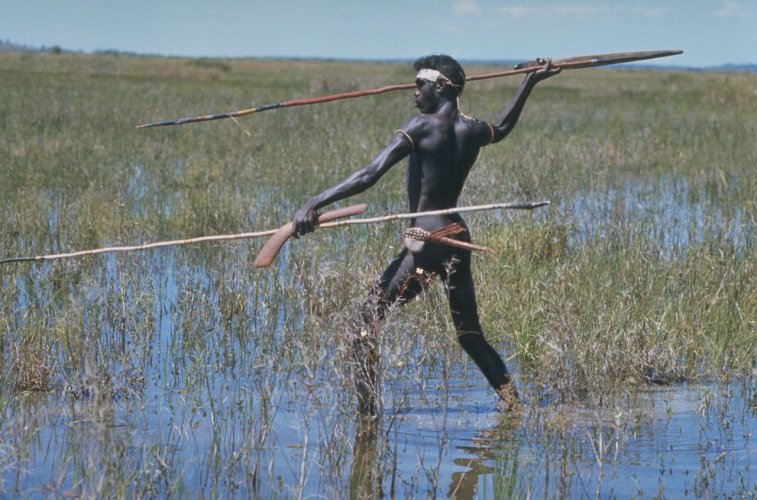 An aboriginal man hunts in a swamp.  He holds a spear in a woomera and he carries a spare spear and a boomerang.  he has an axe in his belt.

Books from the Library:

Aboriginal peoples caught fish, turtles and stingrays using barbed spears, nets and lines with hooks made from sea shells.  The Noongar people were skilled at building circular stone walls in rivers to trap fish.  When river levels fell during the dry seasons, fish that were inside the stone walls were trapped and could easily be caught.

Aboriginal peoples also placed long, narrow baskets of twigs in rivers to trap fish.  The baskets were wide enough for fish to swim into the opening.  Once the fish was in the basket, however, there was no room for it to turn around, so it could not escape.

Although spearing and trapping was traditionally reserved for men, women of some clans fished from canoes using lines spun from the soft inner bark of Kurrajong trees. To attract fish, the women made a type of berley (fishing bait) out of chewed up cockles and mussels, which they spat into the water.

Although the bulk of the catch, or the day's gathered food, was shared with other members of the clan according to Aboriginal custom, fish was sometimes eaten like take-away.  The women would make a small fire ion the base of canoe, on a bed of seaweed, clay or sand to prevent it burning their vessel, and would cook small fish as they were caught.

Lobsters were also netted by coastal peoples, and a beached whale represented a real party, with a whale meat feast.  Whale and dolphin meat was usually cut up into chunks and lightly fried.