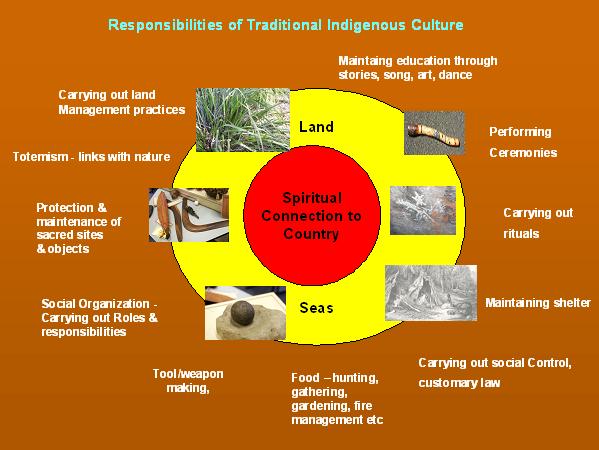 This shows the elements of traditional Aboriginal culture, with spirit at the centre, creating a deep connection with the land and the sea, sustained by a range of human practices.

Look for this button (above) on the READ page of "Find Information", then search for the eBooks shown below:

Look for this button (above) on the READ page of "Find Information", then search for the eBooks shown below:

Books from the Library:

Culture includes the values, beliefs and attitudes of a particular place.  It is about how people live an worship, and about the art, music and literature they produce. Indigenous Australian culture has developed over thousands of years.

It is very old, approximately 40,000 years old. In Aboriginal culture, the land and the environment are very important and they believe that all living things are connected.

Aboriginal mythology shows what Aboriginal people believed were true historical acts done by their ancestors. It explains the origin of natural objects, species, institutions and customs. It can also reveal things that are happening or are about to happen.

Dreamtime stories (or Dreamings) are stories that have been told by the older people of the tribe to the children. Generally speaking an aboriginal's language, skin name and country they belong to are heavily dependent on their family. So, their father's country becomes their country also. Dreamtime stories belong to each region. There are many stories, some major and some minor. The Dreaming stories don't cover everything but usually things that affect society for good or bad eg: edible species, ceremonial objects such as churinga stones and pearl stones, ochre and bull roarers, the moon, sun, stars, flood, fire, wind, rain, material things such as spears and axes and man's origin, life and death.

The importance of soak and water holes within the Aboriginal culture:

Lack of water is rarely a serious problem in the Central Desert, even when there is a drought.  Places to find water are known by the local people.  If a water source exists in an area, the Aboriginal people have a responsibility to care for it so everyone can use it. This is an important responsibility.  Water soakage is important in Aboriginal mythology.  All sources of water are associated with Dreaming stories.

Aboriginal Voices: My Culture and Language

What does culture mean to Indigenous people? Aboriginal artists share the importance of song, dance, music and art as expressions of their culture. All of these forms vary depending on the region, language and cultural groups they come from; but what ties them together is the fundamental importance of storytelling.

Aunty Beryl Carmichael, an Aboriginal elder, tells her personal history. It ranges over her childhood, schooling and family life; an oral history of the Barkindji and Nygampaa people including changes to their environment and culture.

My Place : Before the Barangaroo

Barangaroo's world would be perfect if only Mani, the biggest boy in her group of friends, would stop trying to be number one. Deep down Mani knows she's better than he is. That's why he keeps shutting her out from important adventures - to make himself look good.