The Romanian Revolution was the first to be broadcast live on Television. This link takes you to a page of broadcasts from that day. The clip below is that of dissident poet and writer Mircea Dinescu who helped storm the state run television station on the day of the revolution to announce live on TV "The dictator has fled". 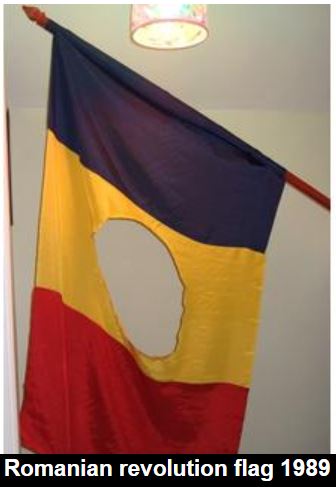 The revolutionary flag was created by cutting the despised communist coat arms arms from the national flag. The media coverage of the event showed the revolution spreading across the country. Anti-Ceausescu groups were readily identified by the "empty flags". The act of cutting a hole in the former flag shows the popular power that can be gained through simple and readily identifiable symbolism. The removal of the communist part demonstrated the rejection of the government without losing the national identity in the tricolour.

Nicolae Ceausescu had created a repressive regime that fostered a cult of the personality. He had completely lost touch with the reality of every day life for the majority of the country and had come to believe his own propaganda.

The collapse of the dictatorship showed the fragility of the system, when oppressed peoples rise up against it
and the hubris that can exist when a leader is not accountable to the population.